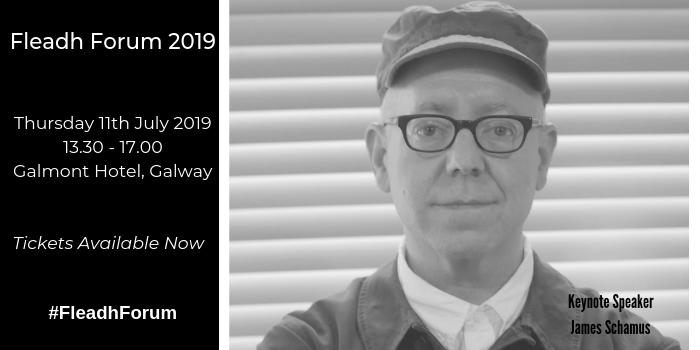 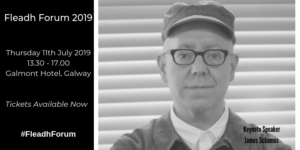 Celebrating its 10th year, The Fleadh Forum is an annual platform to explore and share ideas about what is happening in the audiovisual industry, delivering a unique opportunity for filmmakers and industry professionals to come together and exchange news and views.

Presented by the WRAP Fund and Galway Film Fair, with the support of the Fís Éireann/Screen Ireland, the Galway Film Centre and Screen Skills Ireland, with Creative Europe, The Fleadh Forum will unveil a new format this year. In addition to the keynote address from Writer/Director/Producer James Schamus, the new look Fleadh Forum will present a series of short, direct presentations (8-12 mins) from a carefully curated panel of  industry experts.

The theme for these presentations is “The Substance of Things Not Seen” and speakers will use their unique perspectives on the film industry to shed light on traditionally unseen but vital elements of the business of cinema. Topics will cover sales and distribution, film festivals, post-production, the creative process and much more.

In addition to these presentations, the keynote speaker for this year is prolific screenwriter, director and producer, Mr. James Schamus.  An award-winning screenwriter (The Ice Storm), producer (Brokeback Mountain), and former CEO of Focus Features (Dallas Buyers Club, Lost in Translation, Milk, The Pianist), he made his feature directorial debut, with an adaptation of Philip Roth’s Indignation which premiered at the 2016 Sundance Film Festival and the Berlin Film Festival. Schamus’ New York-based production company, Symbolic Exchange, produced Kitty Green’s acclaimed feature documentary Casting JonBenet which had its world premiere at Sundance, and Jean-Stéphane Sauvaire’s A Prayer Before Dawn which premiered in Cannes 2017 and was released by A24. Recent projects include Rhys Ernst’s trans comedy Adam, The Tomorrow Man, starring John Lithgow and Blythe Danner Andrew Ahn’s sophomore feature Driveways. Schamus is also Professor of Professional Practice in Columbia University’s School of the Arts, where he teaches film history and theory.

The Fleadh Forum is a keystone event at The Galway Film Fair, the industry arm of the Galway Film Fleadh, which hosts Ireland’s longest-running Film Marketplace as well as hosting a wide range of industry-focused events including Masterclasses, Seminars, Networking events, Discussions and more. The Western Region Audiovisual Producers Fund (WRAP) is the regional fund for the West of Ireland committed to strategic investment that encourages regional production and development activity across the film, television drama, animation and gaming sectors.

Tickets are now on sale. Further details of Forum speakers and the event will be announced shortly.

Booking Details:  The Fleadh Forum will take place in the Galmont Hotel from 13.30 – 17.00 on Thursday 11th July 2019.  Tickets for the event are €15 with a limited number of early bird tickets for €10 now available from HERE. Early booking is advised as tickets will be limited.

As the national development agency for the Irish Screen industries, Screen Ireland’s mission is to support and promote Irish film, television and animation through fostering Irish artistic vision and our diverse creative and production talent, growing audiences, and attracting filmmakers and investment into the country. www.screenireland.ie

Founded in 1989, the Galway Film Centre is a non-profit, members based organisation dedicated to the development of film as an artistic medium in the West of Ireland. To this end, we support filmmakers, community and youth groups through education and training, equipment provision and information. In 2014 Galway was awarded the prestigious title of UNESCO City of Film as a result of a bid led by Galway Film Centre in partnership with both local authorities and over 50 local companies involved in the audiovisual sector. www.galwayfilmcentre.ie

The Galway Film Fair, Ireland’s largest and longest-running Film Market. The Marketplace at the Galway Film Fair (11th– 14th July 2019) takes place during the Galway Film Fleadh (9th – 14th July 2019) and co-ordinates pre-scheduled meetings between filmmakers with projects in development and/or completed films and invited Film Financiers, Distributors, Sales Agents, Broadcasters, Film Funds and Major Producers. It is a unique opportunity to meet with the world’s leading financiers in an intimate and informal atmosphere, allowing new talent to be discovered and long term partnerships to be made. www.galwayfilmfleadh.com

The Western Region Audiovisual Producers Fund (WRAP Fund) is a regional fund committed to strategic investment that encourages regional production and development activity in the West of Ireland across the film, television drama, animation and gaming sectors. The Fund of €2,000,000 is available from 2017 – 2020. Recent productions include ‘Oops 2: Back In The Deep End!’, ‘Calm With Horses’, ‘The Winter Lake’ and ‘Death of A Ladies Man’.  The WRAP Fund is an initiative of the Western Development Commission and Galway Film Centre with the support of the local authorities of Clare, Donegal, Galway City, Galway County, Mayo, Roscommon, Sligo and Udurás naGaeltachta. www.wrapfund.ie

Creative Europe is the European Commission’s Framework programme for support of the culture and audiovisual sectors. Following on from the previous Culture Programme and MEDIA programmes, Creative Europe, with a budget of €1.46 billion, will support Europe’s cultural and creative sectors.https://ec.europa.eu/programmes/creative-europe/node_en

ACE Producers is an exclusive network of experiences independent film producers from Europe and beyond. Membership of the network is based on professionalism, mutual trust, collaborative working and openness to new ideas. A fundamental aim of ACE Producers is to encourage and enable co-productions. www.ace-producers.com