As the home of world class talent, the Western Region Audiovisual Producers Fund (WRAP) launched the WRAP Talent Spotlight and Watchlist in 2021 to profile and celebrate established and emerging filmmaking talent. On the Spotlight and Watchlist this month, are some of the outstanding Cinematographers from the West as well as Tristan Heanue’s award winning Irish language short film Ciúnas.

There are a host of internationally recognised Cinematographers from the West of Ireland. The five highlighted as part of the Spotlight are multi-award winning and are commanding the attention of audiences across the world with their work on high profile film, television, documentary and short projects.

Alfie Hollingsworth (Clare)
Emerging award-winning Cinematographer, Alfie Hollingsworth was born and raised in East Clare and developed passion for filmmaking from an early age. He attended The National Film School in Dun Laoghaire to further his burgeoning career in film and took a liking to the visual side of things and decided to peruse a path in cinematography. His credits include Dave Fox’s short Pernicio, which premiered at Newport Beach Film Festival and was nominated for best cinematography at the Richard Harris Film Festival, Tyre Kickers directed by Danny McCafferty, Anthesis by Szintia Szekeres and the upcoming feature film The Sleep Experiment directed by John Farrelly. He has also worked in the camera department on major productions, such as The Rhythm Section, Calm with Horses, Dark Lies The Island and The Martini Shot. On his days off you can catch him wandering in the countryside or staring listlessly at the wall waiting for the next bit of work to come in.

Colm Hogan (Clare / Galway)
Cinematographer Colm Hogan has been working in the Film and TV industry in Ireland for over twenty years. His work has taken him throughout Ireland, England, Europe, North America, Africa, Russia and as far as Mongolia, working on a broad range of documentary and drama projects. In addition, Colm is one of the leading Drone DOP’s in the Ireland most recently filling that roll on James Cameron and Tim Millers’ Terminator, David Goyer’s Foundation and David Lowery’s Green Knight. Colm began his career as a stills photographer. He quickly moved through the ranks from working on Short’s to Drama Series and onto Features. For over ten years Colm worked on some of the biggest features that came into Ireland including Becoming Jane, Lassie and Asylum to name but a few. It was during this ten years that Colm developed a keen interest in Cinematography, watching closely how some of the best DOP’s around, namely Simon Kossoff BSC, Luc Montpellier CSC, Giles Nuttgens BSC, Philipp Blaubach and Robbie Ryan, blocked, lit, and composed shots.

Armed with this knowledge Colm began his career as a Cinematographer when in 2001, he co-shot the IFTA winning feature Documentary Oileán Thoraí. Colm has shot numerous award-winning drama series, shorts, music videos and commercials including the 2015 IFTA winner for best drama series Klondike, music videos for Dermot Kennedy, Talos, Saint Sister, feature documentaries including Henry Glassies Folklands, The Making of MAM, and feature films The Meeting and Foscadh.

Colm lives in the West of Ireland in East Co. Clare with his wife Marina where they have set up a Nature Sanctuary to protect wildlife and conserve the Natural Oak woodlands that have survived there. “It is one of the most beautiful places in the world and is such an amazing place to come home to”.

Narayan Van Maele (Mayo)
Narayan Van Maele, originally from Luxembourg has been living in Ireland for the last 17 years. Narayan has a keen eye, often seeking out the extraordinary in the ordinary. He has shot feature films such as Govinda Van Maele’s Gutland starring Frederick Lau and Vicky Krieps which premiered at the Toronto International Film Festival and won Best International Film at the Galway Film Fleadh, Paddy Slattery’s debut Broken Law, which was Ireland’s highest grossing film in 2020, scooped up a couple of awards In DIFF and can now be seen on Netflix, Kate Dolan’s highly anticipated debut You Are Not My Mother, and Ross Killeen’s debut feature doc about Damien Dempsey Love Yourself Today to be released in 2021. Upcoming features are Claire Dix’s Sunlight and Aditya Vikram Sengupta’s Birthmark. Narayan also has shot numerous award-winning shorts such as Ian Hunt Duffy’s IFTA nominated Gridlock and Low Tide, Tristan Heanue’s IFTA nominated Ciúnas and Harvest, Ross Killeen’s ’99 Problems and Brendan Canty’s IFTA nominated For You. As well as shooting drama Narayan spends a lot of his time traveling from Mayo to Dublin to shoot TV commercials.

For Narayan “Living in Mayo is a no brainer, its such a beautiful county, the air is clean the light is gorgeous and people are lovely. What more could you possibly ask for?…Better weather?”

Tim Fleming ISC (Galway)
Galwegian Tim Fleming ISC is one of Ireland’s leading cinematographers having worked on multi-award winning feature films, television dramas and short films over the last two decades. His extensive list of credits include the Academy Award nominated projects Once (dir. John Carney) and The Door (dir. Juanita Wilson) as well as feature films such as Sweetness In The Belly (dir. Zeresenay Mehari), Jimi: All Is By My Side (dir. John Ridley), Gold (dir. Niall Heery), Citadel (dir. Ciaran Foy) and As If I Am Not There (dir. Juanita Wilson). He has shot multiple episodes of major television dramas including Domina (dir. David Evans) for Sky Atlantic, Netflix productions Fate: The Winx Saga and The Stranger (dir. Hannah Quinn) and Quantico (dir. Russell Lee Fine) for ABC.

Tom Comerford (Clare)
Originally from West Clare, Tom has been working as a cinematographer since 2008. Recent projects include such critically acclaimed films as Sundance Film Festival Premieres Herself directed by Phyllida Lloyd and Rose Plays Julie, directed by Christine Molloy and Joe Lawlor. Tom has shot several notable Irish films including The Hole In The Ground directed by Lee Cronin, Michael Inside directed by Frank Berry and Pilgrimage directed by Brendan Muldowney and has been nominated for multiple awards including the IFTA’s, winning in 2018.

For Tom, “Growing up in West Clare in the early 90’s I would have loved to see a film being made in the locality, working in the industry now it’s great to see projects finally being able to shoot outside Dublin and capitalise on the many amazing locations Ireland has to offer”. 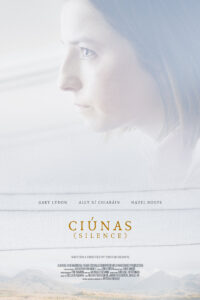 Galway filmmaker Tristan Heanue’s award winning short drama Ciúnas is now available to view as part of the WRAP Watchlist series. The thought provoking film tells the story of a couple making a difficult journey amidst a family crisis. Starring Gary Lydon, Hazel Doupe and Allie Ní Chiarain, the film is set against the backdrop of Connemara.

The film was selected for the 2018 Físín Script Competition in association with Dingle International Film Festival. Since its release it has won over 15 awards both in Ireland and internationally including the ‘Grand Prix’ at the 64th Cork Film Festival and a Writers Guild Zebbie Award for ‘Short Script of the Year”. It was also nominated for an IFTA Award for Best Short Film and Tristan also received further nominations for The Bingham Ray New Talent award at the Galway Film Fleadh & The Discovery Award at the Dublin Film Festival. Tristan is an actor, writer and director who has recently received an IFTA nomination for his lead performance in Broken Law. His next short film Harvest will be released in 2021.