By Sarah DillonMarch 18, 2021No Comments 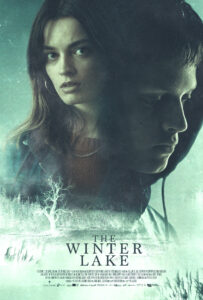 Released Wildcard Distribution and Bluefinch Releasing, the film is currently available in Ireland and the UK on iTunes and for digital download across various platforms including Sky Store, Virgin, Google Play, IFI@Home, Volta, Rakuten, and Chili.

The Winter Lake is an official Irish/Canadian co-production between Tailored Films and EMA Films and was funded by Fís Éireann/Screen Ireland, Epic Pictures Group, the WRAP Fund, Telefilm Canada, Filmoption International, and the BAI, with the support of Creative Europe, and in association with Title Media, Creativity Capital and RTÉ with locations assistance from the Arts Office of Sligo County Council.

Watch the trailer of The Winter Lake HERE.

Hear what some critics had to say about the film:

“With a script from David Turpin (The Lodgers) and a walls-closing-in premise, The Winter Lake has you wondering from the start whether all four characters, or what combination of them, will be alive by the end credits.” – RTÉ.ie

“Thanks to some enticing performances from the main cast, it makes for an uncomfortable and absorbing watch as the rain patters down, washing every ounce of honesty off the shoulders of the community.” – TheUpcoming.co.uk

“Lifts the atmospheric calm of middle-of-the-country Ireland to an eerie and harrowing, otherworldly setting.” – Loud and Clear

“As dark secrets of the past come literally to the surface, there’s an omnipresent tension bubbling underneath the surface just waiting to explode with the potential for physical violence” – Movies.ie