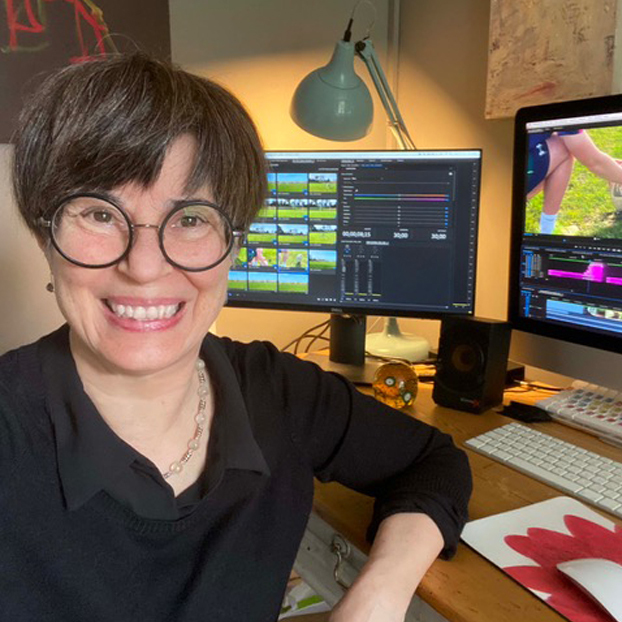 Connie Farrell is a French-American film editor who enjoys risky projects. She is known for her keen sense of structure, an ability to intuit from the material, and creative flexibility. In addition to editing drama and documentary, she often collaborates with experimental filmmakers and visual artists including Alice Maher, Denis Farrell and Áine Phillips, among others. She recently edited a feature documentary by Vivienne Dick, New York Our Time (winner Best Documentary, Dublin Film Critics’ Circle Awards 2020), and is currently developing A Stillness Within (working title) with Swiss artist Victorine Müller, a feature film that explores the tension between Müller’s immersive and contemplative work in a contemporary world. Farrell earned her BA from Barnard College of Columbia University, New York, and an MA in Screenwriting from the National Film School of Ireland, Dun Laoghaire. She is based in Connemara and France, but also has been working remotely for years. Her languages are Premiere Pro, After Effects and Media Composer—as well as French and (basic) Russian. She is a member of Irish Screen Editors.

For Connie, “there’s a freedom to living and working in Connemara. People here are generous, welcoming and not afraid of hard graft, so obstacles tend to melt away. I think the wild landscape has influenced me as an editor, helping me to see unique structures, track a character’s emotional compass, weave together intricate story layers—and most importantly, to embrace a challenge.”