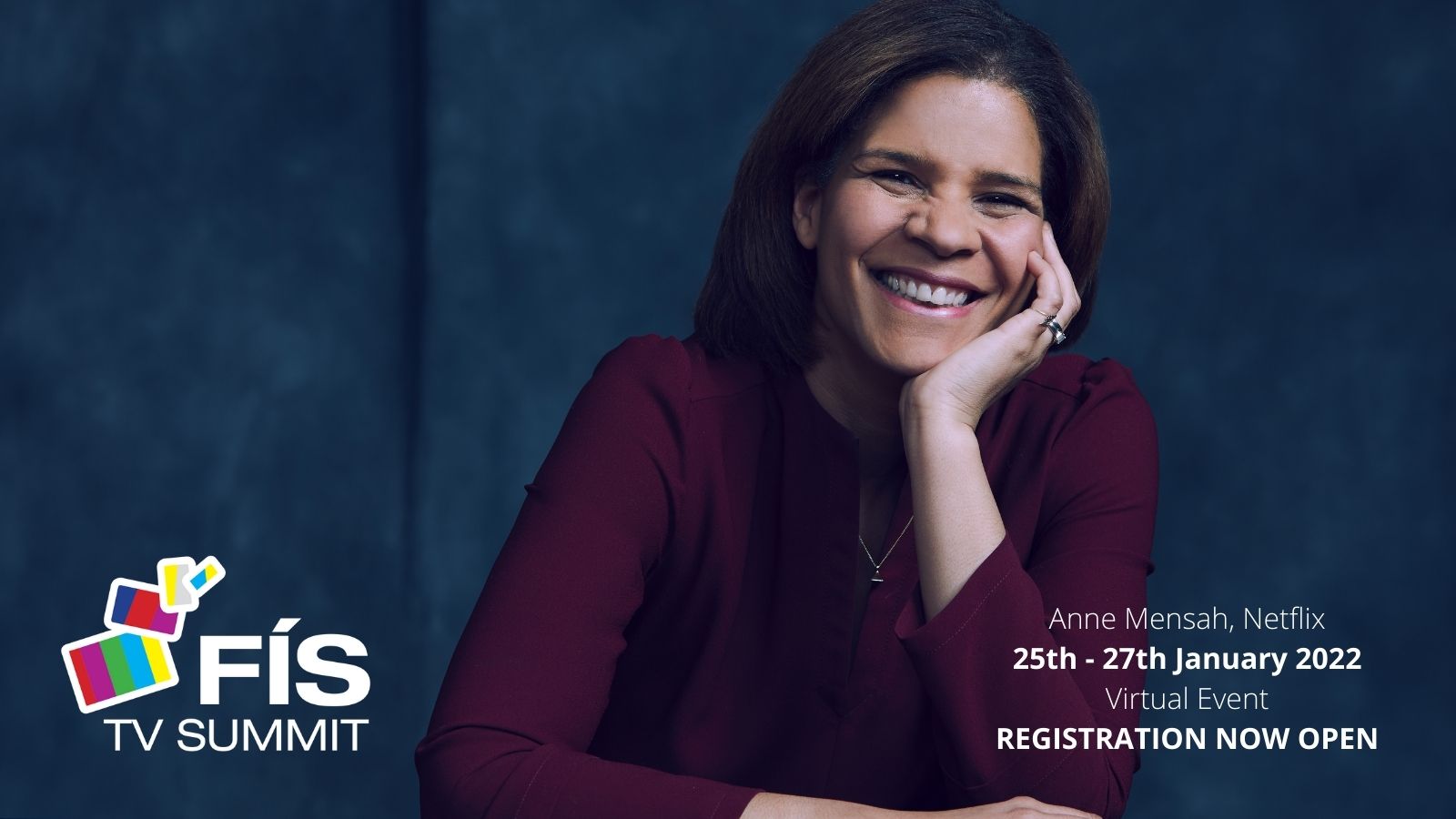 By Sarah DillonDecember 16, 2021No Comments

An annual staple in the Irish screen events calendar, the FÍS TV Summit (Fís) promises to deliver an array of interactive events, panels and interviews from 25th – 27th January 2022 on the subject of television drama. Returning as an online conference again in 2022, the record-breaking symposium will host Anne Mensah, VP of Original Content at Netflix, as its keynote speaker.

Presented by the Galway Film Centre with the support of the Western Region Audiovisual Producers Fund (WRAP Fund), the 2022 Conference offering is designed to support and connect the Irish television community in light of what has been another challenging period, and will deliver the flagship moments, with bespoke industry initiatives, that have become integral to Fís.

Speaking directly to Irish content creators, Fís will welcome Netflix’s Anne Mensah to the January event. Currently the Vice President of Original Content at Netflix, prior to this Mensah was Director of Drama and Sky Studios at Sky UK. Before joining Sky, she was the Head of Independent Drama at the BBC as well as Head of Drama for BBC Scotland. Anne has commissioned a wide variety of internationally acclaimed dramas Wallander, Patrick Melrose, Guerrilla and Chernobyl.

Following the successful 2021 virtual format which attracted an audience from across the world, Fís will offer Irish screen professionals a series of online sessions across three days from January 25th – 27th, 2022 covering essential topics including tv drama development and the creative process, financing, production, broadcast and distribution. An extended version of the Fís Project Clinic in association with MediaXchange and the National Talent Academy for Film & Television will also return for 2022.

Register Now:
Further details on the Fís schedule will be announced in due course as will details of participants and speakers. Registration for Fís is now open. Tickets for the virtual Summit are free but will be limited so be sure to register early HERE.

About Anne Mensah, Netflix
Anne Mensah is Vice President, Original Series at Netflix. Prior to this, she was Director of Drama and Sky Studios at Sky UK. Before joining Sky, Anne served as Head of Independent Drama at the BBC as well as Head of Drama for BBC Scotland. Anne has commissioned a wide variety of internationally acclaimed dramas such as the BBC’s Wallander with Kenneth Branagh, BAFTA award winning Patrick Melrose starring Benedict Cumberbatch for Sky/Showtime, John Ridley’s political drama Guerrilla as well as BAFTA and Emmy award winning Sky/HBO drama, Chernobyl.

Currently, Anne is an Independent Governor and Chair of the Diversity Committee at the Royal Central School of Speech and Drama, on the Board of the schools based educational charity, Into Film – as well as sitting on the Board of ScreenSkills, a UK based charity dedicated to training in the television and film sector. She is a member of the 2018 Class of Henry Crown Fellows within the Aspen Global Leadership Network at the Aspen Institute.